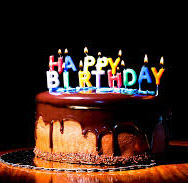 1 May the LORD answer you in the day of
trouble; May the name of the God of Jacob defend you;
2 May He send you help from the sanctuary, And strengthen you out of Zion;
3 May He remember all your offerings,
And accept your burnt sacrifice.  Selah

4 May He grant you according to your heart’s desire,
And fulfill all your purpose.
5 We will rejoice in your salvation,
And in the name of our God we will set up our banners! May the LORD fulfill all your petitions.

6 Now I know that the LORD saves His anointed; He will answer him from His holy heaven With the saving strength of His right hand.

7 Some trust in chariots, and some in horses;
But we will remember the name of the LORD our God.
8 They have bowed down and fallen;
But we have risen and stand upright.

9 Save, LORD!
May the King answer us when we call.

Today is my Spiritual Birthday Week.  I turned to the Lord one winter week in January many years ago.  The Lord had been preparing my heart to know him.

On vacation, in a small church in Tampa, Florida I called on the Name of the Lord and he saved me. This Psalm below was the first Psalm that was read to me by my cousin Maria.

I remember the week this transformation happened to my life because my niece Stephanie had just been born.   I remember I held her in her new crib, a beautiful new life, how precious.....and then my husband, my son & I went on vacation.

I too became new  that week.  Praise the Lord! Stephanie is 23 years old today and I have been serving the Lord for 23 years as well. Happy Birthday Stephanie...I love you! Stephanie never forget that the Lord loves you!  Draw close to him, he indeed is our help! 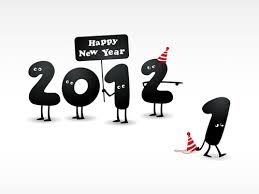 Hebrews 11:6
But without faith it is impossible to please Him, for he who comes to God must believe that He is,     and that He is a rewarder of those who diligently seek Him.

Father it's the beginning of another new year. Already one week has passed us by. Even as the holiday season quiets down and we come back to a "routine", Lord quiet our soul. Let your peace reign and flood us.  Forgive us when we have left you last on the "to do" list. We acknowledge that your Word is True. Yes, you are a rewarder of those who diligently seek you. Those who carefully & attentively search your word. The Bible has the truth and instructions for our lives. We read how you care for the fatherless and the widow. We read how you shut the lions mouth and preserve your people. We study and see how lives are transformed when one encounters your presence. We see ground becoming holy and a
bush ignited but not consumed.  We comprehend that you call men out of troubled
situations and deliver them even if the "impossible waters" have to be parted. Those that are willing you transform, you change men's hearts. Like the potter on the wheel, you can take a piece of clay and make something beautiful. Glory to your Name oh Lord! You take what's barren and bring life. You examine the hearts of men and cause their pride to be exposed.  You take the humble and raise them up. You fill the hungry soul with goodness. Lord, we understand that you stepped down from glory so we would know you. We understand that a great debt had to be paid for us and that Jesus paid for that which we could not. Your Word is filled with mysteries that we don't always understand. We pray that your Spirit would teach us and give us wisdom and revelation. Help us to be sincere in our search and study of your Word. Lord we pray for a refreshing to come to us, that our soul would be reignited by the Fire of God. We know you will return. We know that every knee will bow in your presence.  We know that no one is good except for you. You have taken our sin stained lives, redeemed, cleansed us and have given us purpose. We search diligently Lord and know that no reward compares to knowing you!

Please feel free to reply with our own prayer for the new year.....

Shake & Tremble, you are in the presence of the King! 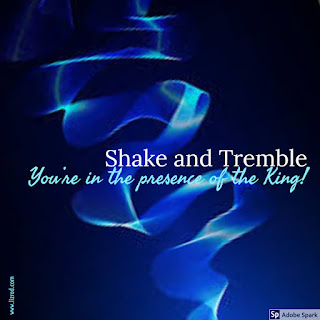 In the year that King Uzziah died, I saw the Lord seated on a throne, high and exalted, and the train of his robe filled the temple. Above him were seraphs, each with six wings: With two wings they covered their faces, with two they covered their feet, and with two they were flying. And they were calling to one another: “Holy, holy, holy is the LORD Almighty; the whole earth is full of his glory.” At the sound of their voices the doorposts and thresholds shook and the temple was filled with smoke. “Woe to me!” I cried. “I am ruined! For I am a man of unclean lips, and I live among a people of unclean lips, and my eyes have seen the King, the LORD Almighty.” Then one of the seraphs flew to me with a live coal in his hand, which he had taken with tongs from the altar. With it he touched my mouth and said, “See, this has touched your lips; your guilt is taken away and your sin atoned for.” Then I heard the voice of the Lord saying, “Whom shall I send? And who will go for us?” And I said, “Here am I. Send me!”

I'm sure we have all been at a stadium or concert when the host of the show or the one preceding the "star" is making introductions and we are just waiting for the words that will announce the "big one" on stage.


I read this passage four times yesterday and this morning was brought back to it.

It’s pretty simple; the God of all creation is ready to enter on this scene and give a charge to Isaiah. The prophet of God will get a message and encouragement to continue the work that God has given him. But before Isaiah would tremble, before he would say the words "woe to me!" the seraphs would make the announcement that the LORD was about to enter, the Lord was about to speak.

At the sound of the seraph's voice, the celestial beings, the entire room begins to quake. The doorpost are shaking, the threshold, the very floor is moving and the temple is filled with smoke. It's no wonder Isaiah is crying out he is ruined! I mean, really, this is just the announcement that God's Glory is now present.

I'm surprised Isaiah did not die right on the spot. It does not take much to frighten us humans. The Lord is constantly saying in the Scriptures, "do not be afraid”. It’s hard for us to understand things beyond what our natural eyes can see.

Lord the pillars are moving, there is what feels like an earthquake under my feet, there is smoke everywhere, and the thing that I can actually see, are these creatures with wings! Six wings! Their eyes are covered but somehow they know where they are going. They are calling out one to another, "Holy Holy is the Lord" and they keep repeating it.

I could imagine it getting louder as the Glorious One was arriving. Can you hear the cheer? They are "looking" at each other (though their eyes were covered) and praising God.  There is no chaos here!

"Holy Holy Holy" is the Lord God Almighty.  Listen all creation, listen Isaiah it's the Lord's message. The whole earth is full of His Glory!! He is going to speak, so listen closely.

Woe is me! Why didn't Isaiah die? Because the one that gives Life sustained him, then he cleansed him and the Word says his sins were atoned for.

Listen Isaiah...listen Liz (put your name here) when God speaks we must listen.

You are mine! I purchased you with the Blood of my Son, Jesus!

Now Isaiah, now Liz be encouraged! This is your charge, your calling. Go and do as I say.
Each of us has a charge, a calling from the Lord.  He has equipped us with gifts that reside within us.  He has given the gifts to us.  It's all for His glory!  Let your Kingdom come.

Here I am Lord, send me.