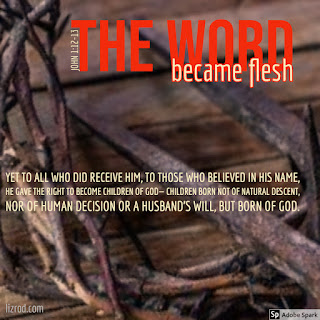 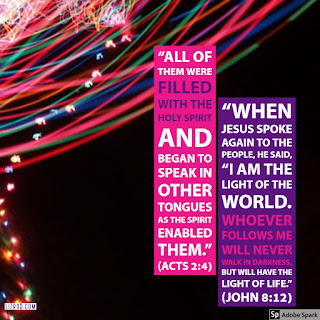 “All of them were filled with the Holy Spirit and began to speak in other tongues
as the Spirit enabled them.” (Acts 2:4)

“When Jesus spoke again to the people, he said, “I am the light of the world. Whoever follows me will never walk in darkness, but will have the light of life.” (John 8:12)

Driving down my neighborhood these last couple of weeks has been an interesting adventure. A lot of homes are beautifully decorated with lights shimmering in the darkness. What a beautiful picture of the light of Christ that lives in us.

Subsequently, I’ve also seen homes that look like front yard graveyards. It seems that the owners of the homes periodically unplug the power of these plastic animations in their front yards leaving remnants of what was. I must admit this is not a great curb appeal!

These plastic animations are at the mercy of oncoming storms and winds. When it is perceived that the weather is changing the owners unplug their puppets because they are unable to withstand the storm.

Everyday circumstances and things I experience have a way of filtering into the reality of my life. It propels me to examine the condition of my heart.

When the storms of life come, am I still shining bright anchored to a foundation that won't move? Is the light of Christ shining, even at times becoming brighter in the midst of turbulent winds?

The Holy Spirit has come to live within me. I’ve been redeemed, purchased and made a representative of Jesus Christ. More tenderly God calls me his daughter. He has warned me that in this life there will be trouble. But he has also promised to help me remain.

When life's troubles arrive and the winds of life take a turn, I am commanded to remain in Christ, connected an anchored to him. It is his power within me that keeps me standing and shining bright.

I am the fragrance of Christ. The joy of the Lord is within me. The righteousness of Christ has made me right with the Father.

Are we shimmering lights in the midst of darkness or deflated, defeated puppets laying down with no life that would represent Christ and all his glory?

Let the on lookers, look. This house will stand! You will not find a menagerie of deflated puppets to represent me. I bear the light of Christ within me for the whole world to see. A vessel weak at times but held together by his Spirit.

Fill me up Lord! Breath on us again. Let the light of your glory sustain us and keep us. In our brokenness, mend us back together. Keep us humble and pride far from us. Go before us and help us to follow obediently that we may experience the fullness of your glory. Holy Spirit fill us and empower us. Baptize us with your spirit.

PS:  Nothing again these puppets :)  They look cute when they are FILLED!
Posted by LebBlog No comments: