A Mystery Laid on the Bed 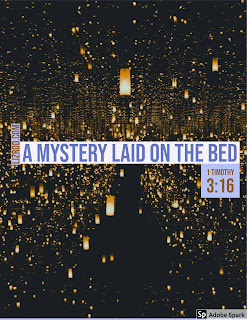 Beyond all question, the mystery from which true godliness springs is great: He appeared in the flesh, was vindicated by the Spirit, was seen by angels, was preached among the nations, was believed on in the world, was taken up in glory.

I was recently remembering an incident that occurred in my family when I was about 10 years old.  My grandparents lived in the Bronx in a 7 story project building.  One evening an accidental discovery in my grandma's bed caused every member of the family to hover over her bed.  No one could figure out this mystery.  It seemed that jewelry if placed on my grandma's bed would begin to what seemed to slowly vanish.  My dad, as he laid down to nap on my grandma's bed discovered that his gold bracelet was changing; almost evaporating as he watched.

As we looked and inquired, including me, a young girl, items made out of gold were being consumed if placed on the bed.  The discovery was so intriguing and yet terrifying; a costly side-show if you will.  Gold is expensive no matter what era we live in.

After exhausting all possibilities the police was called to see if the could solve the mystery. It almost seemed like a game; let's see if it will happen again, at the cost of someones precious gold jewelry.

It was a secret, a riddle that no one could solve. We are intelligent people.  What's happening?  After a while, this little girl seems even afraid.  Somethings eating everything; a monster, a ghost?

Mysteries that seem to have no answer intrigue us, don't they?

Why would God in heaven, send his son to die?  Now that's a mystery!  A mystery by definition is something unknown, obscure, a secret, perhaps something or someone unidentified?

When God sent his son, though some think of it as a mystery, the truth is that God has been speaking to us for a long time.  Go back and read the Bible from the beginning and there he is, Jesus waiting to be discovered; waiting to be announced to mankind dressed in flesh.

Sometimes mysteries are just truths waiting to be discovered.

My mom worked for a pen factory that laced it's product with a chemical element, atomic number 80, symbol Hg.  Well if you know your science, the mystery's name is Mercury!  Yep, one of it's properties is that it dissolves gold.  I can't even imagine all the negative health affects that this scenario may have caused.  Mercy God, mercy!  That night, we began to  understand what was happening.  My grandma would come home from work and empty out her pocketbook on the bed covers.  In her bag was a pen that her daughter, my mom, had given her.  As the pen "leaked" mercury, the gold that came near it would be consumed. If you laid on the bed with gold rings or  bracelets, you got it - they would be consumed.  What a costly nap!

Go back 2,000 years.  This man that came in the flesh known as Jesus, the son of Mary is the begotten Son of God. No mystery, no hidden agenda.  If you want to know him he reveals himself to you.  If you call upon his name and cry out for salvation, there he is!  Want your life changed, your sins forgiven; the God that seems unknown and far off reveals himself to you...to me!  In the flesh, born in a manger.

This indeed was a costly and extravagant gift.  Unlike the gold we lost on my grandma's bed, this mystery wrapped in flesh cost us nothing!  It cost him everything and he gladly came.

Look again on the bed; the bed covered with hay, actually no bed at all but a trough in a smelly environment.  It's the King of kings making his entrance for all to see; It's God himself in the flesh coming for all to experience the release of the burden of sin.

Have gold, lay it by His bed.  Bring frankincense & myrrh.  This is the KING!  He does not come to take but to give!

The gifts we bring are out of thanksgiving and gratitude.  He needs nothing except that those created in his image recognize and receive him.

No Mystery, just a revelation that will change your life!