Jesus said to the servants, “Fill the jars with water”; so they filled them to the brim. 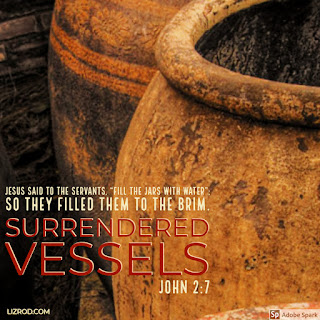 As a little child I remember my dad playing a game with me. His hands the stage for a guessing game to see if I knew where the prize might be. Maybe it was more like a magic act but nevertheless my job was to guess; to try and discover which hand held the prize. Is it in the right hand or the left?

Look at your hands. What do you see? As a young lady I was ravished with disease that left my hands crooked, bent and at times without full function. Surgeries have tried to correct and for the most part have been successful. Praise God! Crooked hands ––but I will say powerful in the hands of God! He is a miracle worker.

Often we can justify our existence as just that­­­––existing. We are running here and then going there and might even feel overlooked in the grander stage of life. We might be the ones in the background, a servant in the shadows. A servant; a useful servant in the hands of the Father.

Let’s peek into a home located in Israel.

There is a story that speaks of a small town known as Cana in the land of Galilee. Here we find a joyous occasion, a wedding none-the-less and Jesus has been invited. He is not the groom or even the master of this celebration; he is just an invitee. An invitee that would cause his disciples to “put their faith in him” once this gala comes to an end.

As the story unfolds we read that at this great celebration, the choice beverage has been depleted. We meet Jesus and some servants standing near six pots; pots used for ceremonial cleansing.

I want to draw your attention to the servants; to the help that was in the background masked by the joyous sounds of this great event; servants that will assist Jesus in his first miracle.

"Jesus said to the servants, “Fill the jars with water”; so they filled them to the brim.Then he told them, “Now draw some out and take it to the master of the banquet.” (John 2:7-8)

Now, the next thing we read is that the master, the host, some translations note him as the governor receives this cup. Whatever his task was, he was also the one that would approve, confirm, the miracle that has just occurred.

It was the servant’s tired hands that brought the cup. Jesus used the lowly humble, perhaps overlooked servant to do his bidding. In doing so, this servant carried a prize, a miracle in their tired working hands.

At what point did the water turn to wine? The Scriptures note the master, “He did not realize where it had come from, though the servants who had drawn the water knew”.

The servants knew what Jesus had done, but when did the water turn to wine?

Sometimes in our everyday routine activity we might attribute these daily tasks to just the ordinary, nothing special, just functions of life.

I challenge that every single activity we are involved in is an opportunity to be used of God.

This world qualifies the glamorous, the high ranking position, the titles of greatness, the rich and intelligent.

But in the Scriptures we often read of God using the lowly in spirit, the meek and the humble. He frustrates the wisdom of the intelligent because they do not look to Him.

God works best when the ground of our hearts is soft and pliable.

The servant at the wedding was just going about his everyday business. He did not wake up that morning and uttered to himself, “today I will be used mightily”! Or, maybe he did!

Perhaps this servant had learned to be thankful in every little thing. Perhaps in the morning when breath entered his lungs, he began to thank Jehovah for his life. Perhaps his heart was waiting for the Messiah.

We are servants of the Most High God. It pleases Him to use us.

The servant at the wedding carried a miracle in his hands. Did the water turn to wine in the jars or when it was poured in the cup? Was it as the servant walked, or was it when the master put his lips to the cup?

I don’t know. But he did surrender himself and was used. His owns eyes testified that this liquid was once water and now it was wine.

The servant witnessed the miracle; the miracle that revealed Jesus’s glory and his disciples put their faith in him. (V.11)

Look at your hands. Perhaps you have them behind your back. God can’t use me.

Hands forward. Like my dad would say, “which hand has the prize in it”? Is it the left or the right? The truth is, one of the hands had the prize.

I’ve surrendered my hands, my heart, my mind, my entire life to the MASTER to be used for His glory.

I’m even like the jar that held the water where this fluid would be transformed because of God’s command; a miracle residing in me and will be made known at the proper time; a time when God will be glorified.

Somewhere in the midst of obedience the miracle happened!

The miracles and glorious events of God are in process.  From the moment Jesus was called to participate on this joyous scene, the miracle began!

It’s all for His Glory. Jesus we invite you; we surrender  –– I surrender.

But we have this treasure in jars of clay to show that this all-surpassing power is from God and not from us. 2 Corinthians 4:7