On the very night when Herod was about to bring him forward, Peter was sleeping between two soldiers, bound with two chains, and guards in front of the door were watching over the prison. And behold, an angel of the Lord suddenly appeared and a light shone in the cell; and he struck Peter’s side and woke him up, saying, “Get up quickly.” And his chains fell off his hands.  (Acts 12:6-7, NASB) 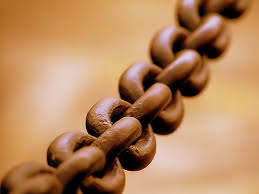 Have you been struck lately? Well, what kinda’ question is that?

When I think of chains, most of the time I think of restraint; an instrument causing restriction; something limiting me.

Sometimes restriction is for our own safety, perhaps even for training or a waiting period.

A prisoner is held in chains for fear he will run from the law; put behind iron bars so that they won't escape. But what if you are innocent and wrongly accused?


Those same chains and cell still keep you unless you are released by the same law that convicted you.

As a child of God we are often asking God to free us from chains, difficult situations that have bound or trapped us. But what if God has freed us and we are still detained.

Life is full of exciting roads to travel but sometimes we are afraid to put our feet on new pavement. FEAR itself can keep us, speaks to us, convinces us we will never be free to move forward.

Has the Lord spoken to you about a new road?  Have you come to a crossroad and are afraid to make a turn? Perhaps its fear of the unknown? Does your heart quiver because you do know that something new is coming but you have never threaded those waters before?

If you have a new pet, a dog for example and you are trying to train him, you will probably use a chain. You restrict him for his own protection. We don't want this creature to escape or end up in danger.  You keep him bound so he won’t harm himself, even worse bite someone.

But, who would keep the dog tied forever? Does not this poor four legged ball of fur need freedom to run and play and explore? Once trained, he is now free. He knows his boundaries.

You are on the waters and your boat needs to anchor. You are enjoying a quiet time, maybe fishing. Soon the clouds come in and you are in the midst of a storm. It’s time to go, but you can’t seem to pull the anchor out of the crevice that has obstructed it. Don’t you do everything in your power to be free? Cut the rope if possible or just chuck the rest of the anchor overboard. But you must go! The anchors purpose is no longer needed.

Amusement parks use chains and ropes to control the lines. They bring order to the masses who want to go on the new thrilling ride. Once you arrive, those chains mean nothing to you anymore. They no longer serve a purpose. You have arrived and the ride is about to begin. Buckle up, here we go!

What if we have been restricted for a short time by God for my own good? He has been training us and soon he is about to launch us into areas of the unfamiliar? Will I refuse and hold dear to my familiar chains? Sadly, sometimes that does happen.

We must decide that it’s time to move forward.

We must get on our feet and embrace the new journey.

Peter was in jail not because of any wrong he had done. He experienced an incredible encounter with an angel from the Lord. The Scripture reads that Peter was commanded to stand up after the angel struck him; in other words, he woke him up and got his attention.

As he obeyed, the chains fell off his hands! Hallelujah! No longer a prisoner; the innocent man was set free. The ministry that the Lord had given him was unfolding!

I don’t know why he startled him that way. But, as he obeyed, THEN the CHAINS fell off.

I think the Lord is about to strike some of us.

He is going to rouse us out of our slumber.

He is going to get our attention and when we respond THEN THE CHAINS WILL FALL OFF!

The preparation is over.

We have been trained; we have endured storms, and the ride is just a few steps away.

We are about to tread new waters.

The road is new and I shout out “I am not afraid.”