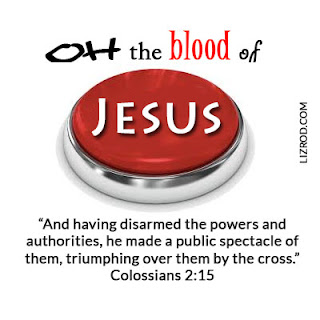 And having disarmed the powers and authorities, he made a public spectacle of them, triumphing over them by the cross.


Does it seem like the assaults are more than the victories? Have we given place to a fallen strategy in our lives?

When the enemy comes crawling into our thoughts why do we make him comfortable and dialogue?

Evil is everywhere whether we acknowledge it or not. When temptations and demonic assignments come our way, we have a choice.

There is authority that has been given to us from the Lord.

We know that in the testimony of Job it was the Lord that spoke to Satan and said, "Have you considered my servant Job? There is no one on earth like him; he is blameless and upright, a man who fears God and shuns evil.”

There were miserable and horrible things that happened to Job but he never cursed God! He did not invite these acts of torment on his life, family and body. It was his heart of reverence and God's "proud heart" of Job that invoked the attacks on God's servant. (Job 1:8) This was authorized by the Lord.

In the valley of decision when temptation is knocking or our flesh is weak we often allow the attack to be executed on us!

We have weapons with divine power that can bring down strongholds. Our weapons can demolish arguments and every pretension thought that sets itself against the knowledge of God.

We can arrest them and make them obedient to Jesus.

Satan is very happy to see us fail, loose heart and loose our strength. He loves to interrupt the very joy that comes from the Lord.

We don't fight in our own strength or power.

Our weapons are from another Kingdom just like us! We have been born from above. The re-birth came with an arsenal of defense.  Have you tried praying?  Has the Sword of Spirit (the Bible) been on our lips; has it flooded our minds?

We have a Commander in Chief, the head of the armies of Glory that at the mention of his name he will dispatch an attack on the enemy who tries to beat and inflict chaos on his family that he purchased with his blood!


An executive order has been issued!

And having disarmed the powers and authorities, he made a public spectacle of them, triumphing over them by the cross. (Colossians 2:15)

He is the head over every power and authority. In him you were also circumcised with a circumcision not performed by human hands. Your whole self ruled by the flesh was put off when you were circumcised by Christ, having been buried with him in baptism, in which you were also raised with him through your faith in the working of God, who raised him from the dead. When you were dead in your sins and in the uncircumcision of your flesh, God made you alive with Christ. He forgave us all our sins, having canceled the charge of our legal indebtedness, which stood against us and condemned us; he has taken it away, nailing it to the cross. (Colossians 2:9b-14)

Yes, read that again! HAVING DISARMED THE POWERS AND AUTHORITIES!

Nothing can touch or aggravate our lives that God himself has not already dealt with or given us victory over. Anything that comes our way that gives us trouble God uses as a refining tool; making us more like Jesus.

Job could have thrown in the towel and said I'm done; I give up; this is to heavy for me, but instead he remained faithful.

He did not use his tongue to curse God. He actually rebuked his own wife.

"His wife said to him, “Are you still maintaining your integrity? Curse God and die!” He replied, “You are talking like a foolish woman. Shall we accept good from God, and not trouble?” In all this, Job did not sin in what he said." (Job 2:9-10)

When the enemy taunts, tempts, tries to trip us; when he remembers his final destination and tries to take revenge on us with weapons of distress and affliction, even affliction of the mind, call on Jesus!

Job continued to bless God's heart with his obedience. He did not turn away in all his agony.

When the Fall ravaged the earth and its inhabitants, an Executive Order was issued from glory!

"And when Jesus had cried out again in a loud voice, he gave up his spirit.
At that moment the curtain of the temple was torn in two from top to bottom. The earth shook, the rocks split and the tombs broke open. The bodies of many holy people who had died were raised to life. They came out of the tombs after Jesus’ resurrection and went into the holy city and appeared to many people. When the centurion and those with him who were guarding Jesus saw the earthquake and all that had happened, they were terrified, and exclaimed, “Surely he was the Son of God!” (Matthew 27:50-54)

"No weapon forged against you will prevail, and you will refute every tongue that accuses you. This is the heritage of the servants of the Lord, and this is their vindication from me,” declares the Lord.(Isaiah 54:17)

To God be the glory!