Shut In - Shut Out 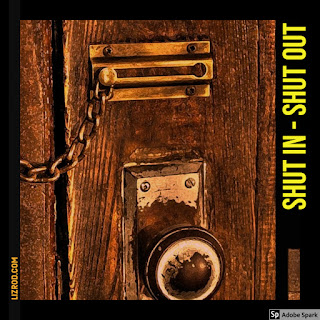 "The animals going in were male and female of every living thing, as God had commanded Noah. Then the Lord shut him in."  (Genesis 7:16)

Ever felt like the “crowd” won’t let you in their circle? Perhaps God has shut you out.

The Lord shut Noah in to give him a safe haven. He was spared from the destruction all around him.

Surely, he felt the waters pound on the side of the wooden ark, God’s wrath hitting every part of the ship. I wonder how often Noah looked at the sealed door and remembered that God himself had shut him in. His security, his trust and future preserved by the hand of God. The winds howling day after day as the deadly waters filled the earth shutting Noah out from God’s wrath. The stench of death was all around him but his escape was in the obedience.

Much time was spent with the Lord. Every detail prescribed. Build the ship because the rains are coming. Noah could not fully understand but he obeyed. God shut Noah in to preserve him and shut him out from his global annihilation!

Adam and Eve were shut out from the Garden. But their exit would not be the end. The Messiah was coming. The enemy of our soul had gained entrance into their lives, but the penalty of sin would soon be overcome.

As we allow our spirit to listen closely to the Lord we will often here him ask us to get away quietly with him. Sometimes that gentle whisper comes in around 3 a.m. when everyone else is asleep. He wants to close us in so we can hear him clearly. He invites us into the tabernacle like he did with Moses.

He will gladly shut out all the earthly distractions that come to steal and destroy our relationship with Him. The noise of the world pounds hard and it makes luring invitations to us. “Sin is crouching at your door; it desires to have you, but you must rule over it.” (Genesis 4:7b) Allow the door to be shut and run to the Lord!

Those outside the Ark mocked Noah. Jeremiah brought a similar warning and the people mocked him as well.

Jeremiah replied, "But if I say, “I will not mention his word or speak anymore in his name,” his word is in my heart like a fire, a fire shut up in my bones. I am weary of holding it in; indeed, I cannot.” (Jeremiah 20:9)


It’s in the quiet times that the Lord continues to permeate and flood us with his presence! He fortifies and strengthens us as we remain in his care.

We are Messengers of Life carrying this same fire! It’s the fragrance of Christ. “He uses us to spread the aroma of the knowledge of him everywhere.” (2 Corinthians 2:14)

As we stay close to the Lord the world around us loses its grip. Jesus spent time alone with the Father because he knew that soon he would be shut in. The cross would call, and the grave would consume him but not overtake him. On the third day the sealed tomb door exploded wide open with his Redemptive Power on display for all to see! Death could not keep him and the penalty of sin was paid.

“But let all who take refuge in you be glad; let them ever sing for joy. Spread your protection over them, that those who love your name may rejoice in you. Surely, Lord, you bless the righteous; you surround them with your favor as with a shield.” Psalm 5:11-12

The next time we "feel" shut out let's remember that God may be protecting us and preserving us for a life-saving adventure! We must bring the Good News to all.  The boat is ready.  The rains are coming.  Even if we are mocked we must share the Love of God. It's like fire shut up in my bones!