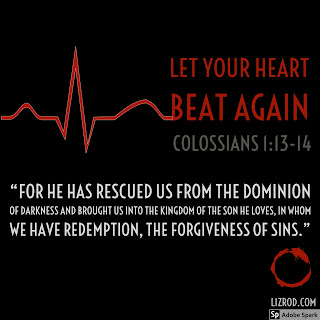 Was it "A" or type "O"? The urgency for a transfusion was here. If the correct match was not given he would die. The wrong kind would cause him to spiral deeper into sickness perhaps even death.

The atmosphere filled with the sound of foot steps, the medical team rushing to secure this life-saving process. It must be completed with accuracy! Restoration of this fragile boy was imperative lest he slip away never to see a sunrise again. We need the blood!


The Father was ready. He would give anything for their child.

He could have chosen not to go. His own life was now on the crossroads of a radical life-changing universal event. If he remained, they would die. If he left it would be to his own demise!

The deception that had crept in so effectively had darken the hearts of his creation. The separation that pulled at His heart would invoke an act of sacrifice. The Son would go. Yes, he would leave to restore harmony with the heart of the Father.

The Father had loved them - His very image was pressed into them.

Offer the sacrifice! I will draw them to myself! "Without the shedding of blood there is no forgiveness of sin." (Hebrews 9:22) It's the everlasting covenant of blood - the saving grace expressed at the Cross of Calvary!

Jesus, the only begotten son of the Father would go as a ransom for many. The Christ would suffer once for their sins, the righteous for the unrighteous, to bring them back! (1 Peter 3:18)

It's the Father's love, the Son's sacrifice that would bring healing for those that would forever be separated from God's presence. They would be drawn and presented with the life-saving sacrifice of Jesus.

Lub-dub, lub-dub, the little boys heart beating again. The life-saving transfusion a success. Joy filled the room and life again would resume for this child. It was all in the blood, the transfusion for life.

The onlookers despair and hopelessness shadowed the cross. It spoke a deep pain as they reflected on their own sin.

Intertwined with this act of sacrifice was the gift; an opportunity for a heart-change; a redemption road. He gave his blood, life-saving blood that would bring restoration to this fragile, broken and sinful world.

The Son's sacrifice accepted. Jesus, overcoming death.The creation beating with life again. The life is in the blood. Let the transfer begin! The blood of Jesus for our sin-infested lives. The sacrifice of one for many. It's the Father calling us sons and daughters.

"For he has rescued us from the dominion of darkness and brought us into the kingdom of the Son he loves, in whom we have redemption, the forgiveness of sins." (Colossians 1:13-14)

It indeed is a Good Friday!
Remembering the Sacrifice!
Restoration is offered today.