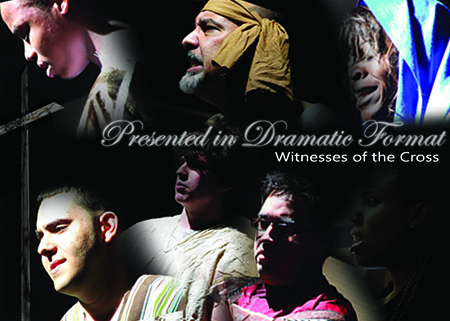 The Witnesses from the Crowd

Everyone remembers last words.  When a friend or a love one dies we often, replay, analyze, scrutinize and study ever phrase; at times even trying to gain comfort from those words; even as life evades those we love.
We are trying to receive something for ourselves; grab a hold of their love for us one more time.  If somehow we have captured their voice, we replay and listen to it over and over again; paying attention to every syllable. Every letter is treasured; oh and let their fragrance be detected in a room and joy springs up in our hearts.
It’s no different on the day our Lord was crucified.  Emmanuel, God in the flesh; and what did we do?  We celebrated his coming into Jerusalem shouting hosanna, hosanna in the highest.  The crowd watched; stood by in awe, some in wonder and amazement, several in repentance, others in self righteousness could not see their God. Some were partakers in his death, and yet he died for them all; for the one who cleaned his brow and the ones who pierced it. For God so love the world that he died, died for them ALL! That’s the love of God!

On that day there were many in the crowd.  Please allow me creative liberty to explore the hearts of the witnesses on that day.  Be Inspired! family & friends, The Seven Last Words of Christ.
Listen carefully and the noises of Jerusalem on that day could be heard.  Examine it with your heart and you can hear the sounds of grace and mercy calling out your name.
It’s the sandals of the Lord walking as he reaches the Mount of Olives.  Surrounded by the disciples, he asks them to pray, as he does the same to his Father in Heaven. It’s not the tongues of men you hear, but the sound of exhausted men sleeping. It’s the cry of the Redeemer calling out to the Father and the sound of angels wings and they arrive to minister to the son.   It’s the echo of the kiss that betrays the Master; the sword that’s swung as flesh falls to the ground. It’s the ache of being disowned; innocent blood.  The sound of remorse; a crow testifying and tears dripping down the face of the one who said, he was willing to die.
Ease drop and turn your ear to the Holy City.  It’s the whipping and the piercing of the flesh; the blood splattering to the ground.  Watch him and look carefully for the one crucified will speak to your heart.  We chant vulgarities and “crucify him”.  He gently speaks forgiveness, allowing the work of redemption to commence.
It’s a crowd of spectators; laughing and taunting; some afraid, several broken and in anguish; others seem unaffected or were they?  Some go along with the plan and others try and stop it. The voice of Pilate, finding no basis for a charge. The ridicule and laughter of Herod and his soldiers. Turn your ear again and the chief priests and the teachers of the law are vehemently accusing him.    The sounds of the day, the day our Lord died for you! Listen.
Listen—the coins in the hand in Judas; the coins tainted with blood. It’s the casting of lots rolling on the ground; all for a few pieces of clothing; the hissing from the serpent lurking in broad daylight for a victory that never was; the rumble of an earthquake, the ripping of the curtain and the culmination of the redemptive plan.
It’s a tearing and a ripping; a split and a piercing into the heart of man.  Some will run; try and mend it; put it up again; hide the sin deep in the crevasses of the heart.

But as light shines in the hearts of men and expose the darkness that has kept us apart from God; some embrace the mercy and grace that’s flooding their hearts.  It’s a choice. It’s a gift.

This curtain has separated us; it has hid our sins from ourselves; God has always seen us for who we are—it’s the True Light that gives light to every man; He has come into the world!