Let them give thanks to the Lord for his unfailing love and his wonderful deeds for mankind, for he 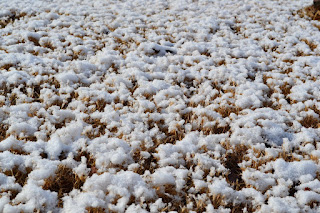 satisfies the thirsty and fills the hungry with good things. Psalm 107:8-9


Ever wonder why the Israelite people asked for manna (bread that rained down from heaven)? The Lord, with a Mighty Hand (Exodus 6:1) delivered the his people via his servant Moses out of the grip of the enemy, Egypt. He parted the red sea and his people with fear and trembling walked across the dry land. Their promise was becoming reality.

So why the grumbling?

Their calloused, sinful hearts had invited a new journey route. Their 10 day journey turned into 40 years. The God who allowed their clothing not to waste in the desert had made provision for them to eat, but their sinful ravished hearts and their whining invoked a lesson from God that needed to be learned.

When sin has a hold on us we do not see clearly (Isaiah 6:9). I'm thirsty (Exodus 17:6) and he provided life saving water out of a rock. I'm hungry. Hungry? Did they not just leave Egypt with plenty; The Lord had made the Egyptians favorably disposed toward the people, and they gave them what they asked for; so they plundered the Egyptians. (Exodus 12:36) Would the God who delivered them leave them to starve in the desert?

The issue here might have been greed, lust for more and a love for "the world"; never satisfied with the provision God had already made.

This week I named the wilderness experience the "desert fast"; a humbling exercise; a much needed lesson to study.

During the last 21 days of fasting, I began to think about the "desert fast".

Whining, complaining, never satisfied could describe any of us at times. Ouch! Sometimes is takes a "desert fast" to humble the heart.

The God who is always providing and loving us often just gets grumbling in return.

Day after day, manna from God's hand was delivered; ironically the same thing over and over. He instructed them to take only the day's provision; in other words, don't horde; there will be plenty for today and tomorrow. (Exodus 16:11-20)

In Numbers 11 we read the whining reached God's ear. We read God providing quail for the grumbling hearts.

I remember as a young girl one of my cousins asked my grandma for juice. They did not want a cup of juice; that would not satisfy them. They insisted they wanted more. It wasn't that we lacked juice, but I believe my grandma recognized greed in the heart. I remember her saying, " you want juice, juice you will have". She sat my cousin down and poured juice until she could not drink it any more. It sounds harsh but no one got hurt, except perhaps their pride.

Here the Lord pretty much does the same thing.

“Tell the people: ‘Consecrate yourselves in preparation for tomorrow, when you will eat meat. The Lord heard you when you wailed, “If only we had meat to eat! We were better off in Egypt!” Now the Lord will give you meat, and you will eat it. You will not eat it for just one day, or two days, or five, ten or twenty days, but for a whole month—until it comes out of your nostrils and you loathe it—because you have rejected the Lord, who is among you, and have wailed before him, saying, “Why did we ever leave Egypt?”’” (Numbers 11:18-20)

The hearts continued to rebel against the Lord; so much so that an entire generation was lost in the wilderness. More than pride was hurt here.

My people, learn to depend on Me. My beloved, I am your Provider. My children (disobedient at times) I will never leave you (Hebrews 13:5 ). The heart had to be changed.

This "desert fast", a place where God provides but also examines the heart. His desire is to cause the heart to change; to see God as Deliverer and Provider.

During our times of fast, this is an opportunity to have God purge out our selfishness, pride, arrogance and every evil thing that rises up, like a defiant fist that in as much says, "hey God I need it my way".

I have learned and continue to learn that God indeed loves me. Kill the flesh and let the Spirit of God arise in us!

Jesus went to the cross to destroy it; Sin. He was victorious and desires for us to overcome it, Sin.

He was obedient to the Father all the way to his death that sin would be dealt with once and for all.
It is finished!

We seek your face Father; humbly we come to you and say we have only sinned against You. Purge, eradicate, and eliminate sin in us. Like an enemy, extradite him, banish him from our hearts. Teach us to obey.

I do not want to go to the desert. I rather be worshiping at your feet!

I give thanks to you oh Lord for your unfailing love and your wonderful deeds you have done for me. Yes you satisfies the thirsty and fill the hungry with good things.

Human beings ate the bread of angels; he sent them all the food they could eat.
He let loose the east wind from the heavens and by his power made the south wind blow.
He rained meat down on them like dust, birds like sand on the seashore.
He made them come down inside their camp, all around their tents.
They ate till they were gorged—he had given them what they craved.
But before they turned from what they craved,even while the food was still in their mouths,
God’s anger rose against them; he put to death the sturdiest among them, cutting down the young men of Israel. In spite of all this, they kept on sinning; in spite of his wonders, they did not believe.
Psalm 78:25-32

A cheerful heart is good medicine, but a crushed spirit dries up the bones. Proverbs 17:22

"Little Jose was chatting with his mom; "mom do you want some pizza"? His mom, Maria said, "no Jose I can't eat that". Jose replied, "mom, is it because you are on the "quick". His sister said, "the quick", what is that? You could here mom giggling; "you mean the fast son, "the fast".