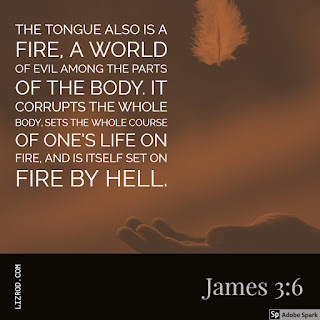 “The tongue also is a fire, a world of evil among the parts of the body. It corrupts the whole body, sets the whole course of one’s life on fire, and is itself set on fire by hell.” (James 3:6)

It can happen at any time.  In a quick swift move the vocal cords are taken over and you are no longer speaking of your own accord.

Ever found yourself saying something you regretted?  Perhaps we’ve spoken a little too quickly, when a few more seconds of silence would have kept our mouth from sinning.

Yep, this is real stuff.

Well, it was a long tentacle that moved swiftly and almost choked its victim.  It swiftly took control of the human and began to speak through him.  The tongue and vocal chords now at the disposal of this alien creature; every word at its command!

Yep, I was watching a movie again and the Lord ministered to me.  This time on the big screen was no other than Independence Day and all its creatures.

The Bible says that the tongue is a very small member of our bodies but can spew great deadly boasts and sin.  “The tongue also is a fire, a world of evil among the parts of the body. It corrupts the whole body, sets the whole course of one’s life on fire, and is itself set on fire by hell.” (James 3:6)

Even Peter was corrected for the sinful use of his tongue.  “Jesus turned and said to Peter, “Get behind me, Satan! You are a stumbling block to me; you do not have in mind the concerns of God, but merely human concerns.” (Matthew 16:33)  Wow, his mind and his tongue.

Sometimes we even say, “The devil made me do it.”  But, that is not true!  We are in control of our own tongues.  Even deeper, is the heart that fills up and then speaks.  “For the mouth speaks what the heart is full of.” (Matthew 12:34b)

At a gathering earlier today, my friend gave me some good council.  She said that sometimes we allow Satan to interject thoughts and I would have to say words too, that bring harm not to those we are speaking to—but to us!  We align ourselves with fallen and faltered thinking and then react.

I am not one who is under the tentacle of an alien.  Better still, I do not have to succumb to the way the world operates.  The Bible says that I can take every thought captive and make it obedient to Christ. (2 Corinthians 10:5)  Submitted to Christ —so that I won’t sin again him.

Cat’s got your tongue? Well, sometimes silence is good.  “Even fools are thought wise if they keep silent, and discerning if they hold their tongues.” (Proverbs 17:28)

When I turn over every member of my body to the Lord Jesus and wait on Him, I am able to overcome!

At the moment when my tongue and thoughts are submitted; when I am lead by the Holy Spirit and obey—it truly is an independence day; a day of freedom from every demonic tentacle that is trying to bring me down.

Freedom is here—and I receive it!


“And having disarmed the powers and authorities, he made a public spectacle of them, triumphing over them by the cross.”  (Colossians 2:15)