What's in a Name?

"But for the sake of my name, I brought them out of Egypt. I did it to keep my name 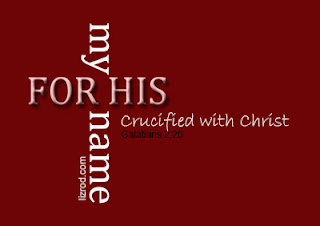 from
being profaned in the eyes of the nations among whom they lived and in whose sight I had revealed myself to the Israelites."

Who cares what other people think?

We’ve all heard this expression, specifically from our parents. Growing up we are sent to school and I'm sure we can all recall the voice, “who cares what others think, be yourself.”

Our parents were trying to cultivate a sense of well being. They wanted us to flourish and thrive in this new environment. There were gifts planted deep inside. Our parents or overseer wanted them to grow.  We were discovering who and whose's we were.


Perhaps it went something like this,  “don’t forget, you are a Rodrigues” or add your family’ name there. It defined who we were, our inheritance.

There were certain qualities that our parents spent years trying to impress on us. How to love ourselves, respect others and if you grew up in a Christian home, how to honor the Lord.

Our name is often the first thing people know about you.

Most importantly, we were not to come home laced with the influence of the world or “the bad crowd”. “Bad company corrupts good character.” (1 Corinthians 15;33)


If I left home with courteous language, I best not come home with a filthy tongue!

We must stay alert when entering new places lest we confirm to their ways.

Here we are on the Babylonian front where a priest in exile (Ezekiel)  is given prophetic visions for Israel.

The Lord warns his people against idolatry.

God’s people are starting to look like and imitate cultures around them.

Don’t look like your captive, don’t indulge in their behaviors and remember who you are!

“He stretched out what looked like a hand and took me by the hair of my head. The Spirit lifted me up between earth and heaven and in visions of God he took me to Jerusalem, to the entrance of the north gate of the inner court, where the idol that provokes to jealousy stood.” (Ezekiel 8:3)

He said to me, “Son of man, have you seen what the elders of Israel are doing in the darkness, each at the shrine of his own idol? They say, ‘The Lord does not see us; the Lord has forsaken the land.’” (Ezekiel 8:12)

“He said to me, “Have you seen this, son of man? Is it a trivial matter for the people of Judah to do the detestable things they are doing here?” (Ezekiel 8:17a)

The Lord’s Name is Vital!

Don’t forget you are Mine!

I guide you in paths of righteousness for my Name’s sake. (Psalm 23:3)

In the Lord’s righteous anger he could have destroyed all his people.

God is always trying to express his Love and his desire for fellowship with us. He has guidelines to keep our relationship pure and safe. He is aware of the lurking dangers and his warning is for our safety.

“But for the sake of my name, I brought them out of Egypt. I did it to keep my name from being profaned in the eyes of the nations among whom they lived and in whose sight I had revealed myself to the Israelites.” (Ezekiel 20:9)

You’ve engaged in areas that I warned you about. You have turned your back on Me.

You have bowed to sinful idols and claimed they are your helper. You look just like the world that hates Me.

Writings written long ago still speak to us today.  The Written World of God!

Often we leave home and return looking, smelling and even acting like the world.

Remember you are mine. I have purchased and ransomed you.

Even until now, you have forsaken my ways.  Return to me

“ I will give them a heart to know me, that I am the Lord. They will be my people, and I will be their God, for they will return to me with all their heart.” (Jeremiah 24:7)

“But for the sake of my name I did what would keep it from being profaned in the eyes of the nations in whose sight I had brought them out” (Ezekiel 20:14)

“Be alert and of sober mind. Your enemy the devil prowls around like a roaring lion looking for someone to devour.” ( 1 Peter 5:8)

Those who hear we belong to Him, will persecute us. “You will be hated by everyone because of me, but the one who stands firm to the end will be saved.” (Matthew 10:22)

“ Also I gave them my Sabbaths as a sign between us, so they would know that I the Lord made them holy.” (Ezekiel 20:12)

“Speak also to the children of Israel, saying: ‘Surely My Sabbaths you shall keep, for it is a sign between Me and you throughout your generations, that you may know that I am the Lord who sanctifies you.” (Exodus 31:13)

Jehovah Mekoddishkem “the Lord who sanctifies you.”

I want you to flourish and thrive.

“There were certain qualities that our parents spent years trying to impress on us. How to love ourselves, respect others and if you grew up in a Christian home, how to honor the Lord.” ~Liz

Honor Him.  He has given us his Name.  On the Cross he purchased us with his blood.