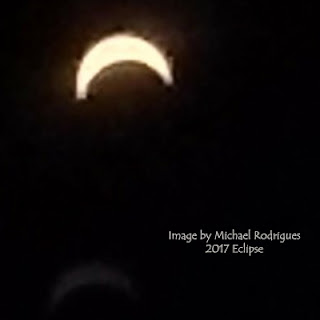 Did you see it?

Everyone is talking about it.

The lesser light obscuring the greater light; a Solar eclipse.

The best part of all the images I’ve seen is the glowing light! The fact that once the moon stands in front of the sun it creates a beautiful glow; the sun itself still shining around the moon.

When Jesus walked the earth we read in the Book of John,

It’s a brief explanation of Christ, the Light coming into world that was in darkness. The world full of darkness could not overcome the Light!

Stand in front and cause those that Christ died for to stumble. Make them turn from their Creator.

Try to make them forget their purpose and blind them so that they cannot see.

Now let the Son of God step into time and the revelation that unfolds Salvation begins. The words of the prophets of old unfolding.

"Who has believed our message and to whom has the arm of the Lord been revealed?" (Isaiah 53:1)

Ask Nicodemus, Israel’s teacher. “How can someone be born when they are old?” Nicodemus asked.” ( John 3:4)

“He was in the world, and though the world was made through him, the world did not recognize him. He came to that which was his own, but his own did not receive him. Yet to all who did receive him, to those who believed in his name, he gave the right to become children of God—children born not of natural descent, nor of human decision or a husband’s will, but born of God.” (John 1 10-13)

Yes born again of the Spirit of God.

Eclipse the heart and blind the eyes. Dull the ears and be cloaked in darkness. That’s what happened when the Fall of Man occurred. Satan not content with his own demise, incited God’s creation to disobey.

Let the Son become the canopy of our sinful lives and new life emerges. The blood that was shed was spent for us; to give us new life!

Did you see it?

Everyone is talking about it.

Darkness could not overcome the Light!

"Having disarmed principalities and powers, He made a public spectacle of them, triumphing over them in it." (Colossians 2:15)

My life was purchased by the shed blood of The Lamb of God!

I am redeemed. Do you see the glow!