I stumbled over the light!

This past Saturday I was at a gathering with my husband. I arrived early because it was a surprise 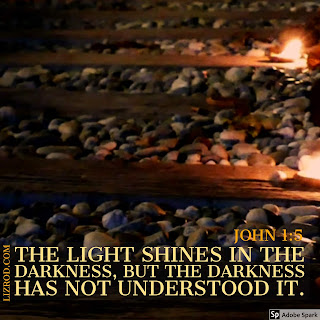 party for my friend.

As I moved around the beautifully decorated tables I came around some chairs aiming toward the venue’s double doors to place my gift on the table.

In a blink of an eye my foot was caught, and I stumbled over a mood light that was placed on the floor behind one of the chairs. I thought I could catch myself and not fall. But like a slow-moving film I found my hand slipping off the chair and my knees hitting the hardwood floor. And hard indeed it was!

I quickly turned over and just sat on the floor holding my knees. Help quickly came to me as I requested that someone get ice. I was trying to alleviate any swelling on my knees. I have rheumatoid arthritis and I did not want to aggravate my body anymore.

Why tell you this story? I must admit that shortly after I was helped off the floor all I could think about was the scriptures. The Bible speaks about men stumbling over the cornerstone, men not recognizing the Light that has come into the world. “The light shines in the darkness, but the darkness has not understood it.” (John 1:5)

Moses wondered what was happening to the bush that was on fire but not consumed. The Lord revealed himself to Moses and told him, tell them, “I AM WHO I AM.” (Exodus 3:14)

Abraham chose to be uprooted from what was familiar. He held on to a promise that God would give him a son; the very one he told Abraham to sacrifice. The Lord revealed himself as JEHOVAH-JIRAH, the one who provides.

King David often stumbled and sinned against God but learn to quickly repent and restore his heart to the God he served. “Have mercy on me oh God according to your unfailing love according to your great compassion blot out my transgressions. Wash away all my iniquity and cleanse me from my sin.“ (Psalm 51:1-2)

Nicodemus, a pharisee who knew the law of God well wondered how he could see the Kingdom of God. Jesus responded to him that he must be born again, born of the Spirit of God.

Humanity has been tripping over the Light since the Fall of Adam and Eve in the garden.

But from the beginning of time God has chosen to reveal himself, one man at a time. Every heart and soul precious to the creator of all things. “He was in the world and all the world was made through him the world did not recognize him. He came to that which was his own but his own did not receive him.” (John 1:10-11)

The pride of humanity is deaf to the simplicity of the Gospel of Jesus Christ. He offered his life as a ransom. God himself providing his own son to pay for our own transgressions and iniquities, our own sin against God. But we have rejected him.

We are born and do not look for the Light. We are content walking around in darkness even enjoying our own sinful state. But God whose love is immeasurable continues to put before us this Light that can illuminate our own darkness.

Jesus said, I am the light of the world. Whoever follows me will never walk in darkness, but will have the light of life.” (John 8:12)

Falling on a hardwood floor left me no recourse but to turn over and hold on to my throbbing knees. I asked for help and indeed the ice held off the swelling. Throughout the night my shoulder and wrist also began to reflect the hit that I had encountered. But I am so thankful to the Lord for keeping my bones from shattering or breaking. He has been merciful to me!

Salvation was similar. I indeed tripped over the Light that had come into the world. He found me broken on the floor and came to my aid. I began to recognize that the brokenness was an issue of my heart. Every part of me was affected. Every part of me in need of a healer, a deliver.

He came in his gentleness and saved me. Like a gentle breeze, I heard its sound. I heard the word and believed that God sent his son for me.

I have remnants of my past like the bruise on my knee from this weekend. But I know that the healer has come not only to protect my bones but to the secure my soul for eternity.

Thank you, Lord, for the reminder again that you have come into this dark world to be the Light, that we may no longer have to live in the darkness of sin.