God's response to sin on the earth after much patience and opportunity for repentance was to end life on earth. Everything destroyed except for Noah, his family and some of his animal creation. 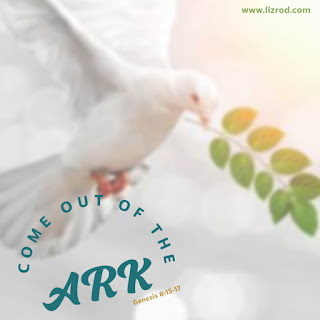 It’s a difficult thing to imagine.

Sin does not happen overnight. A quick action can turn us from light to darkness in a flash of a moment.

Imagine God had preserved you. What if God called you righteous and preserved you as everything around you died.
I don't believe Noah was just resting in the Ark.

As the waters are coming down and rising all around him, I wonder what Noah was feeling?
I'm sure the vibrations on the ark walls were frightening. Rain coming down and waters coming up. Debris, trees, animals, Noah’s friends, his neighbors, and enemies all in the midst of the turbulent waters.

His eyes would witness this. Lifeless bodies surrounding the Ark. That which was once rooted now floating all around him.

The same ears that heard the words Noah build an Ark are now flooded with thunder, lightning and the howling of the wind. The silence of the tongues of men coming to and eerie silence.

If his senses were on high alert, did he smell the salt in the water? Was there acidity in the air? Or was it the smell of death that his nostrils inhaled.

Even the odor from a floating zoo was probably better than the smell on the outside. The inside reminded him that there was still life; that God had preserved him.

Holy fear in the midst of the storm! A sovereign God whose mercy had preserved Noah, his family, and a few creatures.

Scripture clearly displays that Noah was in no rush to get out of the Ark.

In Genesis chapter 8, we see that God sent the wind and the waters receded. Noah remained inside.

The floodgates of the heavens were closed. The rain stopped falling from the sky. At the end of 150 days the waters had gone down.

On the 7th month the Ark came to rest on the mountains of Ararat. The doors remained closed. Slowly the tops of the mountains became visible.
Can you see the HOPE on the horizon?

After 40 days Noah opened a window.

It's a slow progression with no urgency to go out into a world that had just been judged.

He waited 7 more days and He sent out a dove again and this time the bird came back with a freshly plucked olive branch.

Perhaps at this time Noah would be ready to exit the Ark but scripture says he waited 7 more days and sent out the dove again and this time the dove did not return.

Noah wasn't rushing into anything. He would not move unless he heard God speak.

Too bad we can’t say the same thing universally today about us. Sometimes we cry out to God and we think that God is taking too long.

Our two-minute prayer is expected to return a quick result and in our favor nonetheless. Oh yes, God can answer quickly. But the lesson here is to WAIT on God!

Exasperated in our current situation? It's best to wait until we hear God say, “come out.”

Scripture says that Noah then removed the covering from the Ark and saw that the surface of the ground was dry.

What a great time to get out and stretch his legs after all it's been a long stretch, right?

All these long days that turned into weeks and months. Here is Noah inside the Ark.

Countless hours in the presence of God crying out to him and waiting on him to respond.

That's the position of the believer!  That's the place of the child of God.
On our face crying out to Almighty God!

When the rain is coming down and the child of God sees no way out, we must remain in prayer submitted to him with a song of praise on our lips.

Then God said to Noah, “Come out of the ark, you and your wife and your sons and their wives. Bring out every kind of living creature that is with you—the birds, the animals, and all the creatures that move along the ground—so they can multiply on the earth and be fruitful and increase in number on it.” (Genesis 8:15-17)

The long wait brought forth the answer from God.

Come out of the Ark!  Yes, you, your family and the creatures I preserved.
That's the answer we wait on.
My ears are attentive to the Lord.  Speak, Lord.
God bless you!~Liz
at December 31, 2020